That suggests cyclical movements in Australian small business are on track to repeat themselves in 2018. While tighter cash flow is nothing to cheer about, the historical data suggests small businesses’ health will improve from here after a seasonally tepid start to the year.

We can see from the late-payments data that January’s slowdown, driven largely by the holiday period, gave way to an uptick in February activity. The average invoice with 30-day terms waited 36.7 days to be paid, down from a one-year high of 38.8 in January. If past patterns hold, payment times should continue improving for at least a few more months.

While the February figure worsened slightly — 49.2 percent of businesses were cash flow positive versus 49.4 percent in January — the number is likely to rebound in the following months. February is typically the nadir for cash flow, and past years have recorded even lower numbers for the month. In 2016, only 44.7 percent of small businesses were cash-flow positive for the month.

In fact, over the past three years there’s a decidedly upward trend in the percentage of cash-flow positive businesses, suggesting business owners on Xero are becoming more adroit in handling the seasonal ups and downs of accounts receivable and payable. 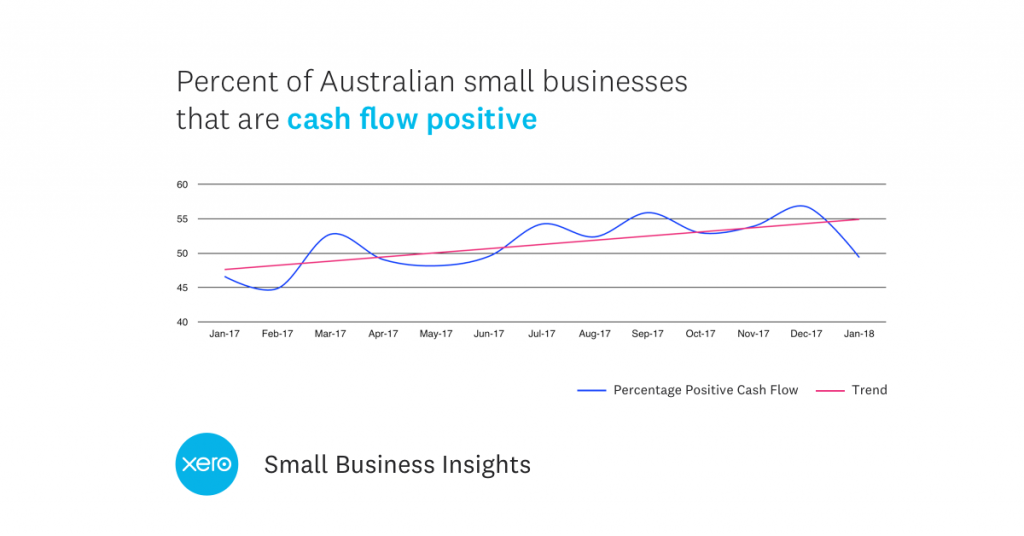 The typical pattern has been: Hiring ramps up in October and November, particularly among casual workers, whose ranks later thin during the January holidays. Hiring tends to resume in February as the economy returns from break.

Casual employment was the driver at small businesses. It surged 4.8 percent in February while part-time employment rose 1.6 percent and full time climbed 0.70 percent. March’s data is likely to show a continued albeit smaller increase in both hiring generally and casual employment specifically.

Stay tuned for further updates ahead of the Australian federal budget!